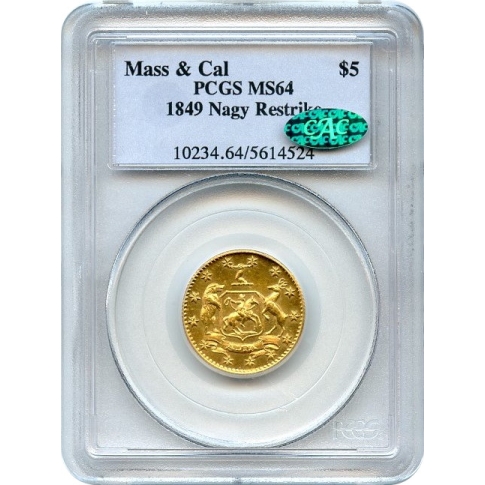 During the year of 1849, upon hearing confirmed reports of a gold discovery in California and the subsequent opportunities it presented, individuals collectively formed mining and trading companies.  In New England, many groups or associations were formed, over one hundred being located in Massachusetts alone.  Some were obviously better financed than others and even raised funds for coining machinery.  One such company, called the Massachusetts and California Co., was created for the sole purpose of minting coins out of the ore located in the gold fields.  A local newspaper suggested that the company would be similar to those of Christopher Bechtler, a private minter of coins located in South Carolina during the 1830's.  The Massachusetts and California Company was unusual, in that its headquarters remained in Northhampton, Massachusetts, while the remaining association departed for California with all necessary coining equipment.  In May of 1849, the New York Tribune reported the following:

What Congress failed to do for California, private enterprise has taken in hand. A party has just gone from Northhampton, Mass., taking with them a mint, or rather all the implements necessary for coining gold and silver, and a competent assayer.  Their object is to establish a private mint, purchase gold at a fair price, and coin it for circulation. They will be able to coin $10,000 per day, and their enterprise is said to have the sanction of the Government.  What a commentary is this upon the enterprise of our government?

Evidence shows, particularly that found to be in print, the association did indeed make the trip to California, but the minting equipment did not.  Kagin estimates that the party should have arrived during the month of August in 1849, but by October, several members of the association were running the Weld & Company's Inland Express. Another press report in early 1850 documents an express company running between San Francisco and Sacramento, and that "The machinery for coining 'the dust' had not arrived."

By 1850, there were so many private minting companies competing with each other, that public resistance began to row at an alarming rate.  The coins that exist from the Massachusetts and California Company are believed to have been struck as patterns or experimental pieces in Massachusetts, and not in California.  The few known gold pieces exhibit uncharacteristically high copper content for a coin struck from California ore.  Several examples remain in other metals, including silver, copper and brass.  All of these circumstances led to the final dissolvent of the company on January 18, 1854.

Obverse: 13 stars surround an extended arm on torse throwing an arrow at the top.  Below the arm is a stag standing on hind legs to the right and a dexter bear standing on hind legs to the left supporting a shield depicting a vaquero throwing a lasso on a horse rearing.  Below the shield is a ribbon with the motto ALTA (a reference to Upper California).  Struck with a Reeded Edge only, including patterns, except the lead K-3 example.

Reverse: MASSACHUSETTS & CALIFORNIA CO. surrounds a wreath bearing eight berries on either sprig.  Within the center appears the word FIVE with the letter D. below it.  The date 1849 appears below at the base of the design.