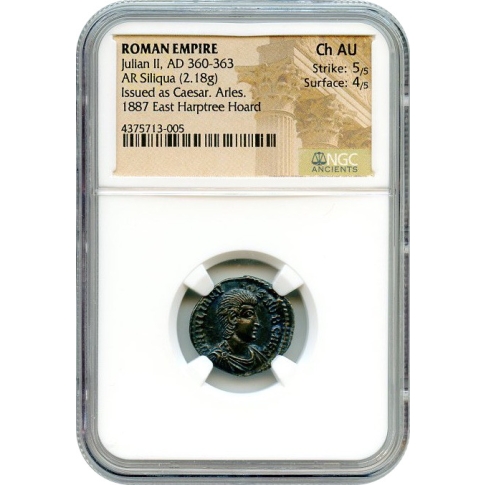 This is one of three silver siliqui offered by AUCM. They are appealing early examples of the coinage of the Western Empire and hail from the East Harptree Hoard, discovered in 1887 on the land of Mr. W. Kettlewell of Harptree Court.

Harptree Court in East Harptree, Somerset, England, where the famed hoard was found in 1887.

After study by the British Museum, the coins were returned to Mr. Kettlewell, and made their way down through his family, eventually landing in the numismatic community, where they have been studied and enjoyed since. The overall quality of the hoard was extraordinary, with most examples, like the ones on offer here, exhibiting an attractive colorful patina and good mint bloom. The coins are in the original condition as they were as when returned to the family by the British Museum in 1888, where they were studied and written about for the Numismatic Chronicle by curator John Evans.  The siliqua of Magnus Maximus was unique in the hoard, being the only example included in the group from this emperor.

Deposited at a depth of about 6" in the late 370's A.D.,  the hoard comprised 1,496 coins in all, dating from the 330's to the late 370's A.D. and provides a fascinating glimpse into a window of time in British antiquity during the 4th Century A.D.  A trifecta from this hoard is on offer here today.

With the death of Julian II, "the Apostate” in June of 363, the family dynasty of Constantine the Great came to it’s conclusion. His successor was the commander of his elite army division that had been battling the Persians, the military commander Jovian. Unfortunately for Jovian, however, less than a year after becoming emperor, he died from inhaling toxic fumes from his room heater, at the young age of 33. With his death, the armies of the East and the West empires were poised for civil war, brought on by unrest in the Gallic ranks. Julian and to a lesser extent, Jovian, had been able to force cooperation between the armies in Gaul and the ones in the East, but the situation was deteriorating in early 364.

With death of Jovian, the two armies decided that it would be necessary to have emperors in both the East and the West – except for brief periods, this arrangement would last for the remaining years of the Roman Empire – around 100 years more for the West, and about a thousand for the East. The first of the Western Emperors was Valentinian I, who had been the commander of a division of spearmen under Jovian.  Valentinian was succeeded by his son, Gratian. The usurper Magnus Maximus, was proclaimed emperor upon the death of Gratian, as the days of Empire in the West were winding down.