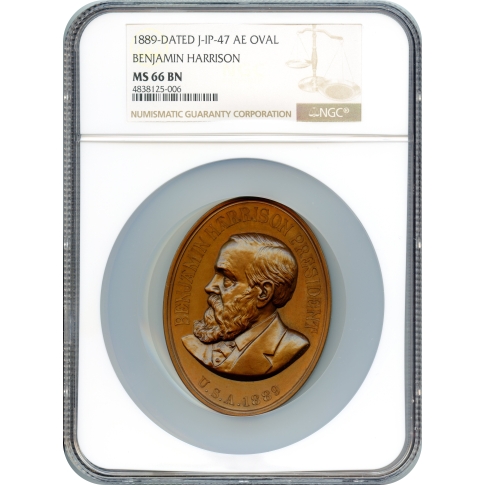 Attractive bronze restrike of Harrison Indian Peace Medal from 1890. There is 1 in MS66BN with 2 finer. Below is the story of the creation of the original IPMs of 1890.

Two distinct Indian Peace Medals were crafted carrying the image of President Benjamin Harrison. One was produced by the Mint to continue the series that began with the Hayes medal. It was an oval medal designed by engraver Charles E. Barber, and the reverse was the same as the one used on the previous three medals. Bronze examples were struck at the Mint for collectors, however, none were ordered in silver or bronze to present to Indians. The oval version one is being offered by AUCM in this listing. 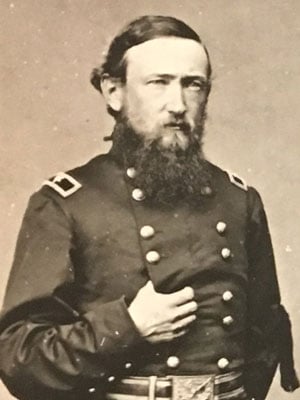 Benjamin Harrison as a Union officer in the Civil War.

The Harrison medals that were given to Indians were a new design, and were the last Indian Peace Medals to be designed. The idea of a new medal was from a group of Indians. While in Washington in 1890, four members of the Oto and Missouri tribe asked the Commissioner of Indian Affairs to provide five silver medals that presented the image of President Harrison. They wanted round, not oval, medals that were at least 2-1\2 inches in diameter. The Indians even offered to pay for the medals themselves.

John Noble, Secretary of the Interior, requested of the Secretary of the Treasury that the medals be produced at the Mint. Thomas J. Morgan, Commissioner of Indian Affairs, sent this note to the Mint: "The designs hitherto used for the reverse of the medal do not appropriately represent the present state of the Indian, and in the enclosed rough design an attempt is made to give the idea that he has abandoned his tepee and has adopted a civilized house and occupation."

A plaster model was crafted based on the rough sketch submitted by the Indian Office. The model was met with criticism. In the end, Morgan wrote, "...I much prefer that this one be remodeled, or that an entirely new one be substituted...I believe the designs adopted hitherto for such medals have been prepared by the Mint. Will you be kind enough to follow the old custom of making the design using the crude ideas suggested by the Indian Office, or discarding them altogether as may seem best." The new design, crafted by Charles E. Barber, writes Prucha, "consisted of two circles, one with an Indian in his native costume standing in front of a tepee, and an overlapping one that showed a modification of the original sketch. Appropriate items -- crossed peacepipe and tomahawk and a plow, with generous branches of olive -- were used to fill in the design, and a banner inscribed PROGRESS appeared at the bottom lest the symbolism be missed."

On October 25, 1890, the five silver medals that were first requested were sent to the Oto Indian agent. November of that year saw 18 more silver Harrison medals presented to Cheyenne and Arapaho Indians. In total 27 silver and five bronze such medals were struck for presentation.