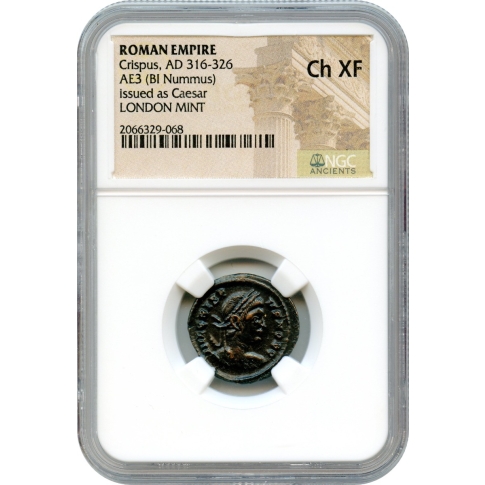 Crispus (Flavius Julius Crispus) died in 326. A Caesar of the Roman empire, he was the first born son of Constantine I and Minervina. It is probable that he was born between 299 and 305, but also possible that he was born as early as 295, in an unknown area of the Eastern Roman Empire. His father, Constantine, was a hostage in Nicomedia, in the court of Eastern Roman emperor Diocletian, thereby securing the loyalty of Constantius Chlorus, the Caesar of the Western Roman Empire, who was the father of Constantine and grandfather to Crispus. It was in 307 that Constantine allied himself to the Italian Augusti; this alliance was sealed with Constantine's marriage to Fausta, the daughter of Maximian and sister of Maxentius. But ending his marriage to Crispus's mother did not end his relationship with his son. Crispus was raised by his father in Gaul.

On March 1, 317, Crispus was proclaimed as one of three new Caesars. Constantine appointed him as commander of Gaul, and he moved to Augusta Treverorum (Trier), the regional capital of Germania. Crispus was the leader in victorious military campaigns against the Franks and the Alamanni in 318, 320 and 323, and he guaranteed the continued Roman presence in Gaul and Germania. The following years saw Crispus assist his father in war against Licinius, Constantine's brother-in-law and emperor of the Eastern Roman empire. Crispus was commander of a fleet of 200 ships in the Battle of the Hellespont at the straights of Bosporus. Crispus handily beat a force that was at least double in numbers to his own. Crispus also led legions in another decisive victory againsts the armies of Licinius outside Chrysopolis. Now Constantine was the sole Augustus in the Empire. He honored his son for his assistance by featuring him on coins, statues, mosaics, cameos and more. He was the best choice to be heir to the throne.

It was in 326 that Constantine had his son tried, sentenced to death and executed. His wife convinced him that Crispus was in love with her, and had tried to seduce and rape her. Her jealousy led her to lie to her husband about his son. She was concerned that her own children would be left out in the cold and contrived the plot about Crispus. Constantine believed her, and due to his strong personality and quick temper, had his beloved son killed. Some months later, Constantine discovered the truth and had Fausta killed. The method: drowning in an overheated bath.