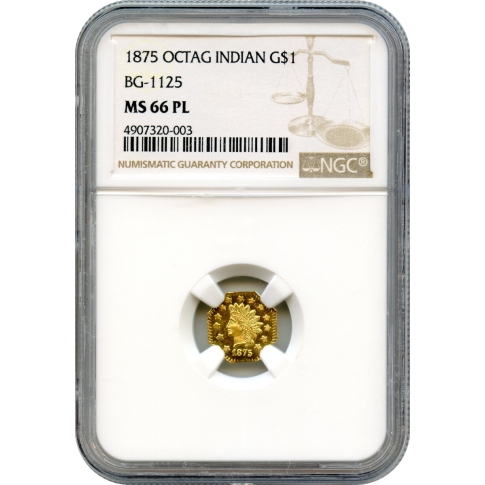 Here's an exciting opportunity to acquire a finest known Prooflike example of this dramatic Fractional Gold variety. Created and produced by San Francisco jeweler Christopher Ferdinand Mohrig, there are a limited amount of the BG-1125s available to collectors.

PCGS has graded 45 of them in total; three of those are designated PL, with one awarded the graded of MS66PL. On the other hand, NGC has graded 15 of this variety: 5 in Mint State, 7 in Prooflike, and 3 in Deep Prooflike. Of those, NGC has given the MS66PL grade to two examples. The only one graded finer than this offering by AUCM is a single piece graded MS67DPL. The possibility exists that among the graded population are piece that have been resubmitted by collectors. 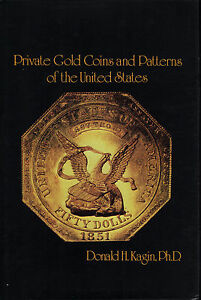 It was on August 10, 1876, that Mohrig was arrested by the Secret Service for violating the 1864 law against private coinage. His stock and dies were seized and melted, which may explain the rarity of his varieties such as this one. An attractive Indian Head design graces the obverse. It is inspired and derivative of the ubiquitous Indian Head cent. The Indian Head is surrounded by 13 stars. The reverse has CALIFORNIA GOLD above a wreath near the rim. Within an intricate wreath is found 1 DOLLAR.

Don Kagin, the author of Private Gold Coins and Patterns of the United States (1981), explains how these coins were minted:

Most of the fractional coins were made by the hammer method.... This was a process of striking where the bottom die was placed on a block, a coin blank was laid upon it, and the top die upon the blank; this top die was then struck by a sledgehammer. Blows of varying intensity would cause potions of one side or edge to be more weakly struck than another.