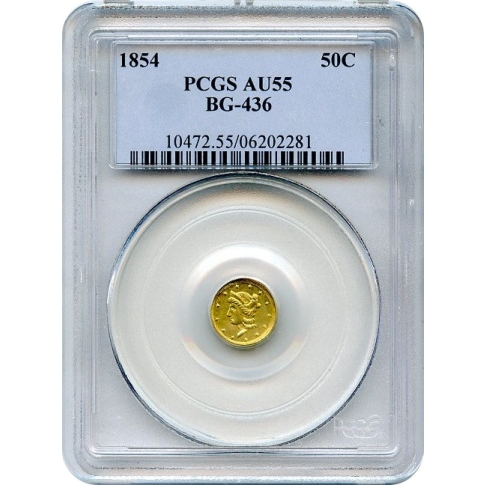 Die State II ("period" die defect after date, "exclamation point" defect above period after DOL.).
Unusual Liberty head with coarse curls and hollow neck, 13 stars around; eagle with shield and branch, but no scroll (!), HALF DOL. around 1854 . A somewhat amateurish effort by an unknown maker (“Unknown Maker B”). Perhaps the work of Auguste Dubois, as surmised by the cataloger in the second edition of California Pioneer Fractional Gold. (His name is spelled “Auguste Duboice” in the San Francisco Herald; “Augustine Dubois” in the Sacramento Daily Union; “Augustin Dubois” in the Placer Times & Transcript (the latter two citations courtesy of indefatigable Gold Rush researcher Dan Owens); and “A. Duboce” in LeCount & Strong’s San Francisco City Directory for the year 1854. Mr. Dubois, who had a partner named John Waschwald or Oswald, operated out of a house on the southeast corner of Green and Fayette Streets with all the windows blacked out except one. The pair were accused of counterfeiting, and when this house was searched by the San Francisco police, a secret room was discovered in the cellar that held a rolling machine, furnace, crucibles, and a large amount of melted gold. When they returned to it, Auguste and John were arrested, but made bail and the charges were dismissed as false three days later. Mr. Dubois stated to the police that he had been a gold pen maker in New York, where he was from, and that his equipment was used for that purpose.

While that may have been his intention in coming to California, upon seeing small California gold in circulation he was probably tempted to join the party, since he had all the necessary equipment (except a screw press, and he probably had that also but omitted in the newspaper accounts). In any case, there seems to be no other suitable candidate for a maker for the year 1854 only.

Obverse:  13 small stars near border; 1st star to left near border and just above point of bust, 8th star near upper bun of hair.

Reverse: Eagle with shield and branch, no scroll, HALF DOL. 1854 around.

There is a small crack at bottom edge of planchet before striking.