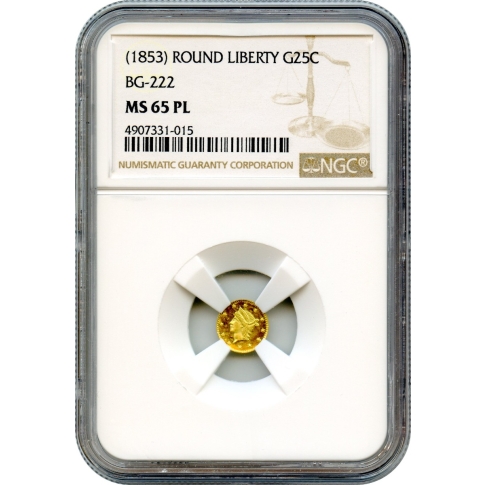 No date appears on the coin, but struck circa 1853, based upon comparisons made with other similarly-dated circulating California Fractional gold coins. Two (2) examples were recovered by divers from the shipwreck of the S.S. Winfield Scott. The S.S. Winfield Scott was operated by the Pacific Mail Steamship Company to carry passengers and cargo between San Francisco and Panama. On December 1, 1853, she left San Francisco bound for Panama with about 400 passengers and $884,861.50 in treasure. Two days out she was caught in a storm and ran aground 30 miles west of Santa Barbara. The passengers and most of the treasure were rescued. What remained were mainly items of small value abandoned by the passengers in their haste to evacuate the sinking ship. Originally made by Antoine Louis Nouizillet, c.1852-1854, in San Francisco, California.

Historical Note: Two (2) examples were recovered by divers from the shipwreck of the S.S. Winfield Scott. The S.S. Winfield Scott was operated by the Pacific Mail Steamship Company to carry passengers and cargo between San Francisco and Panama. On December 1, 1853, she left San Francisco bound for Panama with about 400 passengers and $884,861.50 in treasure. Two days out she was caught in a storm and ran aground 30 miles west of Santa Barbara. The passengers and most of the treasure were rescued. What remained were mainly items of small value abandoned by the passengers in their haste to evacuate the sinking ship.