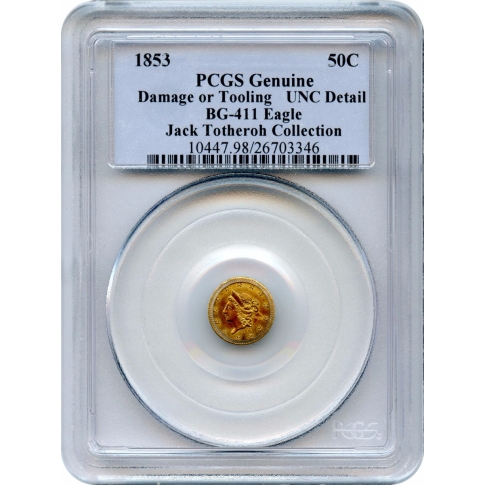 Extremely Rare: only 9 specimens recorded in Breen-Gillio, one of which is plugged and may no longer exist; a 10th example, jewelry damaged, appeared in September 2003, and an 11th was sold by Heritage 1/30/2004, Lot 6398--this lot appears to be a 12th specimen, acquired by Jack Totheroh after 2003.

Beautiful ruby red toning, bluish highlights around devices. PCGS Genuine (Damage or Tooling -- UNC Detail). A scratch in the right obverse field prevents this superior coin from grading in high mint state. The reverse is Choice. Only 5 graded in mint state by PCGS, and only 4 auction records including possible duplication. Totheroh`s original BG-411 was stolen in the 1993 burglary. Serial# 26703346 Totheroh Collection HKA#63563

EJV's Comments: gorgeous, original coin, with no detractions except several very light scratches below the bun in liberty hair. Totally original reverse, well struck with full feathers, premium quality. the only "damage" are the three or four barely noticeable light hair line pin scratches mentioned. Please look at the coin in detail and inspect. EJV feels this is MS 65 or finer without the few hairline scratches. It may be the finest known, or nearly so.
fh- we lowered the estimate from that published in the catalog. it was based on a perfect coin.

Obverse: Liberty head with rounded curl at the bottom. Initials “GG” are under bust. 13 stars with the 1st star to the left of the bust point. There is no period after the first G. The “GG” stands for Gaime Guillemot & Co.

Reverse: F below 4th feather of eagle tail; repunched DO in DOL.; bottom of left wing parallel with top of H in HALF.