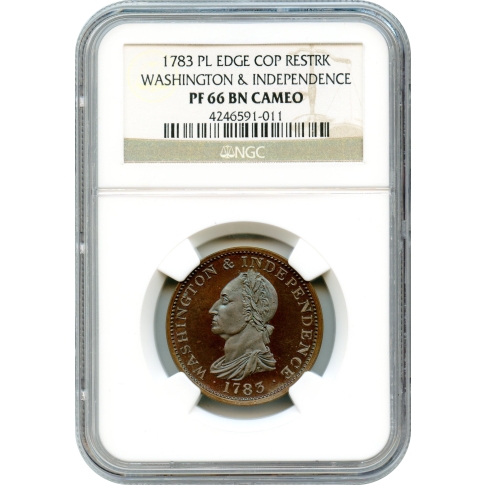 Stunningly attractive restrike of one variety of the Washington & Independence token that research has determined was struck circa 1825-1830 in England. This piece is the TOP POP as CAMEO and the ONLY specimen certified by NGC as such-! There have been 20 of this variety graded Proof Brown by NGC but none are finer than PR65BN!

Author Mark Fox wrote in The Numismatist (2012): "In light of the evidence ... I maintain that the minter of the Washington & Independence cent tokens was ... Thomas Wells Ingram. ... Ingram had the skill, capacity and American clientele to make the production of the tokens a reality. At some time after Ingram’s death, his sons may have sold his minting apparatus in a public auction attended by W.J. Taylor, who produced the restrikes from Ingram’s dies. A half century after our country achieved its independence from Great Britain, English coiners still influenced American numismatics." The date 1783 upon this token is significant, since in the eyes of the British the signing of the Treaty of Paris that year was the event that marked American independence from England. 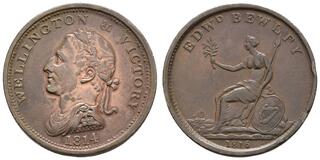 Image of an Irish "Wellington & Victory" token dated 1814/1816. Note the similarity between it and the "Washington & Independence" token.

According to Dick Johnson, noted scholar on medallic history, "1783 Washington and Independence Medal (obv by Thomas Halliday) was actually the military bust of the Duke of Wellington with added lettering to make it appropriate for Washington; rev engraved by Thomas Wells Ingram in Birmingham from painting by Edward Savage made in Philadelphia..."