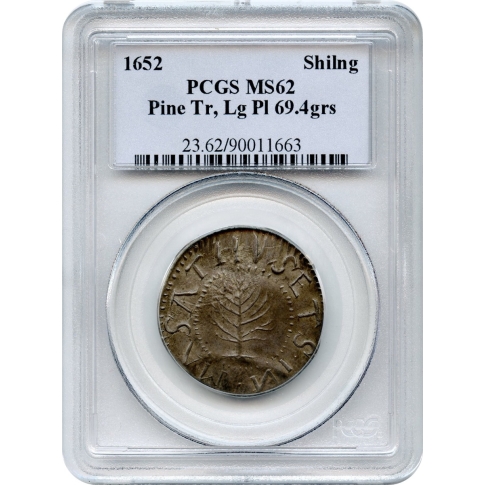 This is the finest Noe-5 we've been able to trace. N.5 is a handsome variety and its backwards N on the reverse lends it a certain naïve charm. As a variety, Noe 5 is not difficult to locate in any grade at the Very Fine (20-35) level, but any grade better than that, it becomes quite tough. There are a handful of About Uncirculated to Mint State specimens known. Noe 4, 5, and 6 were struck from the same pair of dies in steadily deteriorating states. The differences between N.4 and N.5 are minute; those between N.5 and N.6 are more noticeable but most collectors still find them difficult to tell apart. Noe-5 is identified by a break from the outer to inner beaded circles through the M in DOM.

The Massachusetts Bay Colony struck the first coins on the North American continent.  Beginning in 1652 and continuing for the next 30 years, the Boston Puritans struck silver Shillings, Six Pences, Three Pences, and starting in 1662, Two Pences.

In 1652, John Hull and Robert Sanderson were appointed mint masters for Massachusetts Bay Colony. During that same year, John Hull states in his diary, that, “upon occasion of much counterfeit coin brought into the country, and much loss accruing in that respect (and that did occasion a stoppage of trade), the general court ordered a mint to be set up, and to coin it, bringing it up to the sterling standard for fineness; and, for weight, every shilling to be three pennyweight.“

The mint-house was located on Mr. Hull’s estate, the land to be conveyed to the government, at a fair evaluation, when his office of mint master expired.

Joseph Jenckes cut dies for the first coins, such as the Pine Tree shilling. While there is no direct evidence for this claim, there is circumstantial evidence that Jenckes created steel punches, blank dies, and other tools for the mint. The design was promptly put in execution. The date attached to the coins is 1652, and was never changed, although the coinage was continued for several years. The first order of the court was, that the coins should be, “for form, flat and square on the sides, And stamped on the one side with NE, and on the other side with XIId., VId., and IIId.” It was afterwards ordered, that, to prevent “clipping or washing,” they should have “a double ring on either side, with this inscription: Massachusetts, and a tree in the center, on the one side; and New England, and the date of the year, on the other side.” They were also to have “a private mark, known only to the governor, and the sworn officers of the mint.” This latter condition was to thwart any counterfeiting attempts that could prove to be devastating to the psychology of the community.

In 1663, the court ordered a coinage of Two Penny pieces. All persons had the liberty to bring in bullion, plate, and Spanish pieces, and have them converted into Massachusetts coins; but, in 1654, it was enacted, that to “send, carry, or transport, out of this jurisdiction, any of the money” so coined, exceeding 20 shillings for necessary expenses, should subject the offender to the confiscation of all his visible estate.

According to tradition, Joseph Jenckes cut dies for the first coins minted in America, such as the Pine Tree shilling. While there is no direct evidence for this claim, there is circumstantial evidence that Jenckes created steel punches, blank dies, and other tools for the mint.

These coins carried distinctive obverse and reverse types, identifying them as native products of the newly planted English colony. The coins circulated widely at the time, from French Canada in the north to the West Indies in the south, from Boston in the west to London in the east.

When Massachusetts first struck its coins in 1652, it embarked on a business venture that was without precedent in the New World. To realize just how much of a numismatic milestone this was, we need to remember what America looked like when the coins were first made.  For a Boston Puritan, America was a wild and wooly place full of danger, as well as promise.

In 1652, the main colony of Massachusetts included Boston and 15 recently founded neighboring towns. Boston’s total population was only around 3,000 souls, hardly enough, one might have thought, to need their own mint and coinage. Outside the small, scattered English towns lived the native peoples, seen by the Europeans settlers as savages and, even worse, non-Christians.