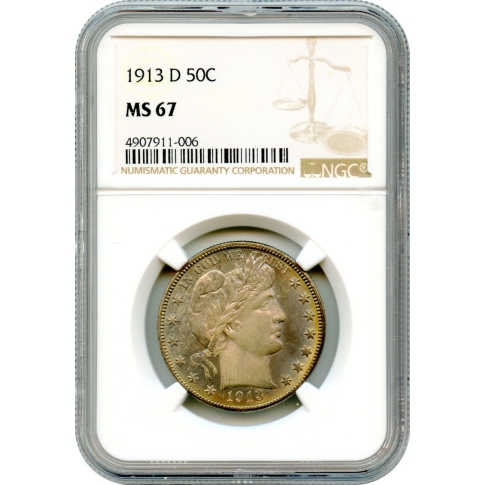 Superb Gem Mint State example, and the sole piece certified as MS67 by NGC. Plus it is tied for 'Finest Known' with a single PCGS MS67 that was sold by Heritage in January 2018 for $43,200.

Of the total 73 issues of Barber half dollars produced by the Philadelphia, Denver, New Orleans, and San Francisco mints, this coin ranks 7th lowest in original mintage numbers (534,000). As a result, it was collected, saved and possibly even hoarded because it was so rarely encountered. The 1913-D coin offered by AUCM is much more attractive than the PCGS MS67 Eliasberg/Dale Friend/Eugene Gardner Coin (above). Please compare the two MS67 coins for yourself and you will see which one is a truly "Wow!" coin.

We've traced this specific coin back to 2005, when it was also offered and sold by Heritage, for twice the going rate of other 1913-D Barber Halves in the same grade. At that time, Heritage wrote,

...It was even hoarded as a low mintage issue in Good-VG condition. That being said, the availability of the '13-D drops off precipitously above the MS64 level. Gem and better pieces are no more available than other, better known issues.

To date (11/04), only five MS66 coins have been certified--three by NGC and two by PCGS. It is curious that such a widely saved issue would have such a low survival rate in high grades, but it is obvious that slide marks from Wayte Raymond holders, stacking in rolls, and a general disregard for the fragile nature of the surfaces of Barber coinage took its toll over the decades. This is an especially attractive coin that has a shimmering, softly frosted finish that enlivens the toning on each side.

And speaking of toning, the head of Liberty has a light gray coloration that gives the obverse a cameoed appearance when set against the rich blue-purple fields on that side. The reverse is mostly brilliant with just the slightest accent of color evident. A bit softly defined on the peripheral obverse stars, the reverse also shows a little softness in the usual places. Most easily identifiable in the future by a short horizontal mark across the leaf at the top of Liberty's laurel wreath.