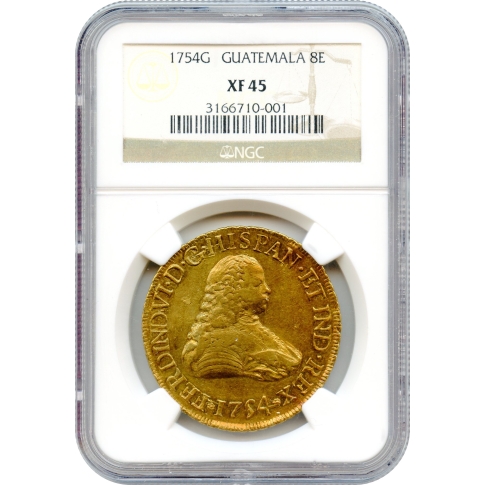 It is with true pleasure that we at AUCM offer for consideration a great rarity from Spanish America: a Guatemala Ferdinand VI 8 Escudos 1754G-J, graded NGC XF45. Struck at Guatemala mint (modern day Antigua). KM7; Calico 551. This is possibly the finest known of this extremely rare issue. The piece offered is at least a grade higher than the Norweb specimen that sold in 1985. Plus, even though it carries the same grade as the famed Eliasberg piece, without a doubt it has superior eye appeal with its outstanding coppery-gold patina. It was in 1754, the year of this issue, that Guatemalan 8 Escudos were first machine-struck. That process added a rim to coins that previously had been produced with crude edges (known as cobs). Additionally, 1754 was also the first year that the actual bust of Ferdinand VI was used. Before that year it was the image of Felipe V that appeared on coins attributed to the reign of Ferdinand VI. In his book La Onza, Xavier E. Calico reports that there are few specimens known of the 1754G-J 8 Escudos.

The mint in Guatemala was a late addition to the economy of Spanish America. The request to have a mint there was not accepted until 1730, when the Viceroy of New Spain and the bishop of Guatemala jointly petitioned the king. It was via a Royal Decree of January 17, 1731, that Felipe V approved its creation. In order to lower costs, the Mexico mint was responsible for creating and running the new mint. Mexico sent its old minting equipment to Guatemala, which arrived in February 1733 (in what is now Antigua, Guatemala), along with a large technical team led by José Eustaquio de Leon, the long-time assayer of the Mexico mint, who became the director of the new mint. The creation of trial pieces began that year, however the mint did not officially open its doors until July of 1738. Hammer production of coins was carried out during the rule of Felipe V, with dies of the new king, Ferdinand VI, being shipped to Guatemala at the end of July 1746. It was a Decree of May 14, 1751, that saw the crown order the new mint to change its production methods. The piece offered by AUCM was the first struck in the Guatemala mint with the new minting technology, offering evidence of the new mint's dependency on the Mexico Mint.

Before minting of this issue, the hammer method was still being employed. This issue was first released on March 29, 1754. The letter 'J' on the reverse, within the golden fleece to the left of the coat of arms, is the assay mark of José Eustaquio de Leon. The design of the obverse of this coin is quite striking. It is the first type: the small head with the chest widening at the lower part of the bust. This design type had been abandoned some years before in Madrid and Seville (1747 and 1748 respectively) and was still in use, in addition to Guatemala, in Mexico (1748-1756) and Santiago (1750-1759).